Last Saturday we organized the first tracklocross race in Berlin. With “La Crossed – make cross fixed again” the motto was clear and we were amazed how many people came out to celebrate a sunny fall day with cross action on fixed gear bikes. If you don’t know a thing about tracklocross, don’t worry, we have some exclusive stories from the event.

The history of tracklocross

There are days in a life of a cyclist which mean more than the others. This story happened in the early fall days, the year came slowly to an end, the race season was over, everyone finally put their legs up. The leaves were falling, covering the streets, the daily rain shower appeared and everything was covered in mud. Lets call it dirty. There were few dudes and dudettes whom took out their cyclocross bikes and rolled around in the woods.

But one day red haired Constanze asked herself: “Why not doing it fixed?” Yeah, why not! The changes on her fixie commuter were quickly made: SPD-pedals, riser bar and treaded tires. Boom. Done. Tracklocross was born. 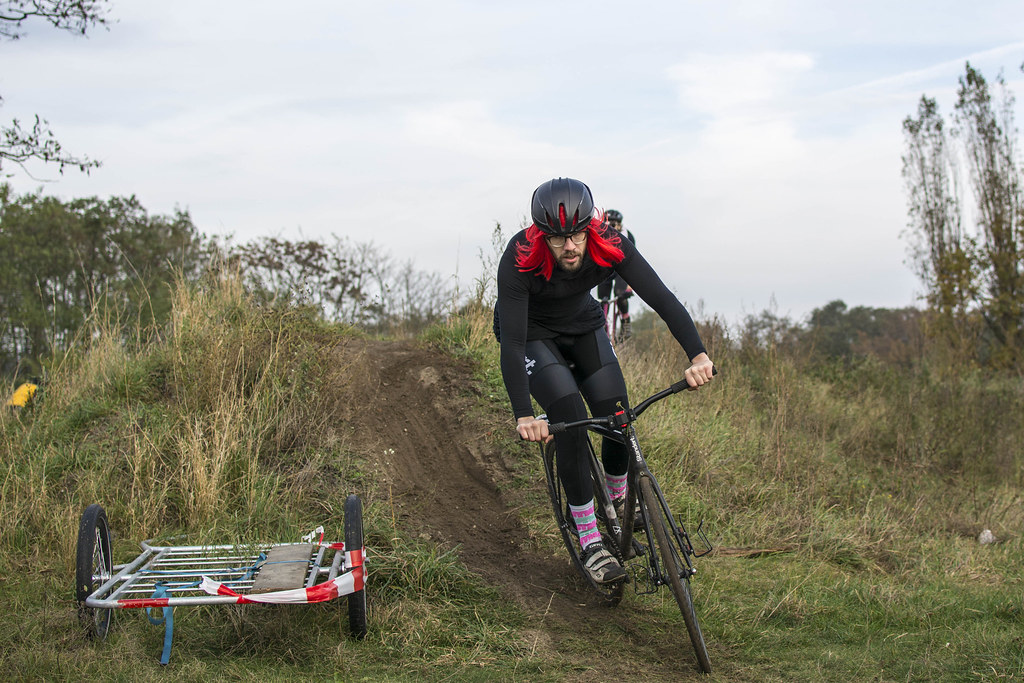 Nobody really got what Constanze was doing. What the hell, fixed cross? To be fair, there was this one awkward fakeanger, who was afraid to miss the newest thing all the time anyway. But it took a couple of years, before the people realized that they were missing out on something.

Finally last Saturday, the first tracklocloss race in Berlins history was held on one of the best playgrounds in town. The Tempelhofer Feld. For the street kids out there: Yes, you can find off-road sections there. To celebrate this breakthrough quite a few special guest showed up.

an intergalactic field of tracklocross stars

We all know that Sonic is just the king in rolling over obstacles and he showed his skills not only once. Together with two last unicorns Sonic was in good company. The unicorns brought their gang: The mayfly came along, to spend her first and last day successful on the pump track. Also the Krokonauten landed on earth to race with space power. 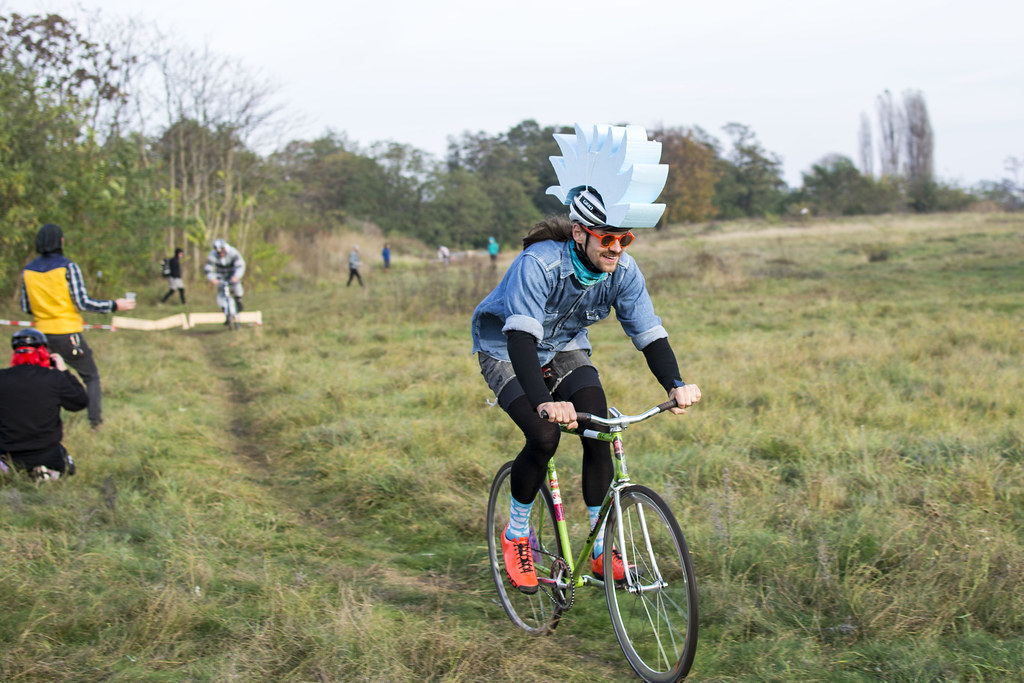 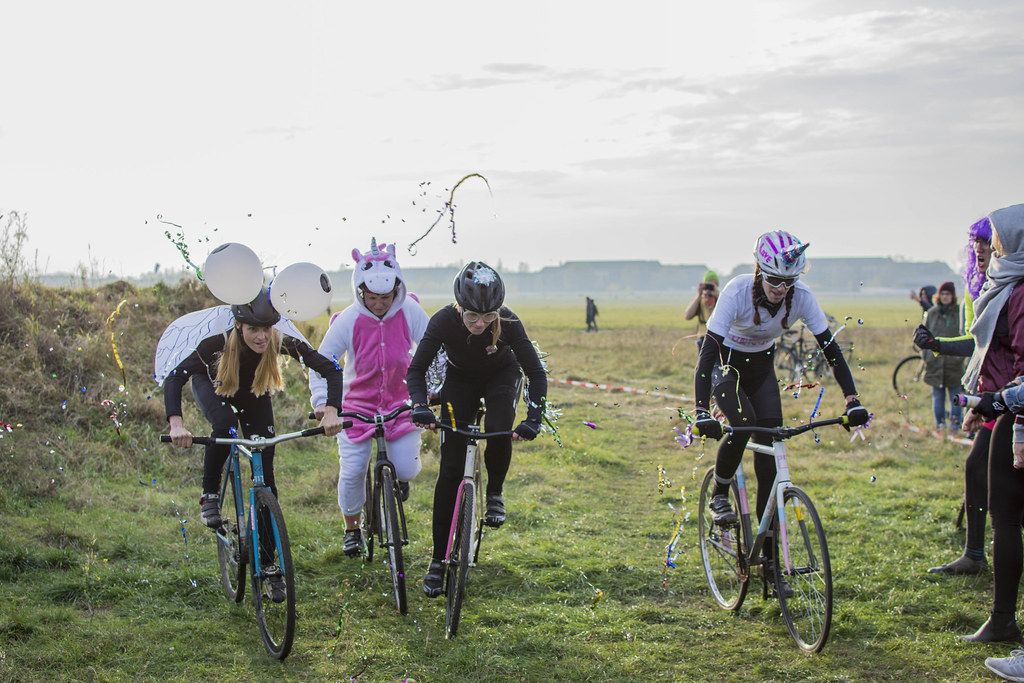 A good race cant exist without the right party people. Axel – Partyking from FC Berghain – came along with his friends from Hamburg. The two Track Queens from Tracklocross EV Bummsbude Reeperbahn just love glamorous moments in mud during a good cross race. 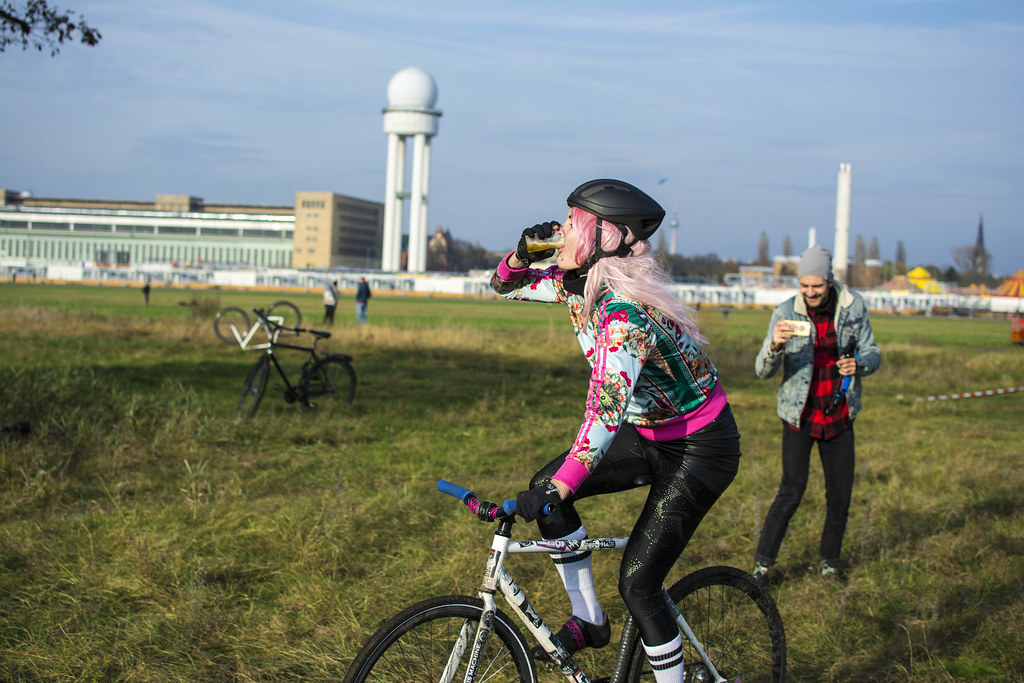 To round up the field, there was an international track hero. The one and ONLY Eike came all the way from Copenhagen, Denmark, because he heard the rumor of a legendary tracklocross race from a good old friend. Who is always well informed and on the right route. Yes, indeed Captain Paul, he sailed on all the puddles this weekend. Captain Paul never shows up without a date and brought his sailor girl from a harbor nobody knows. 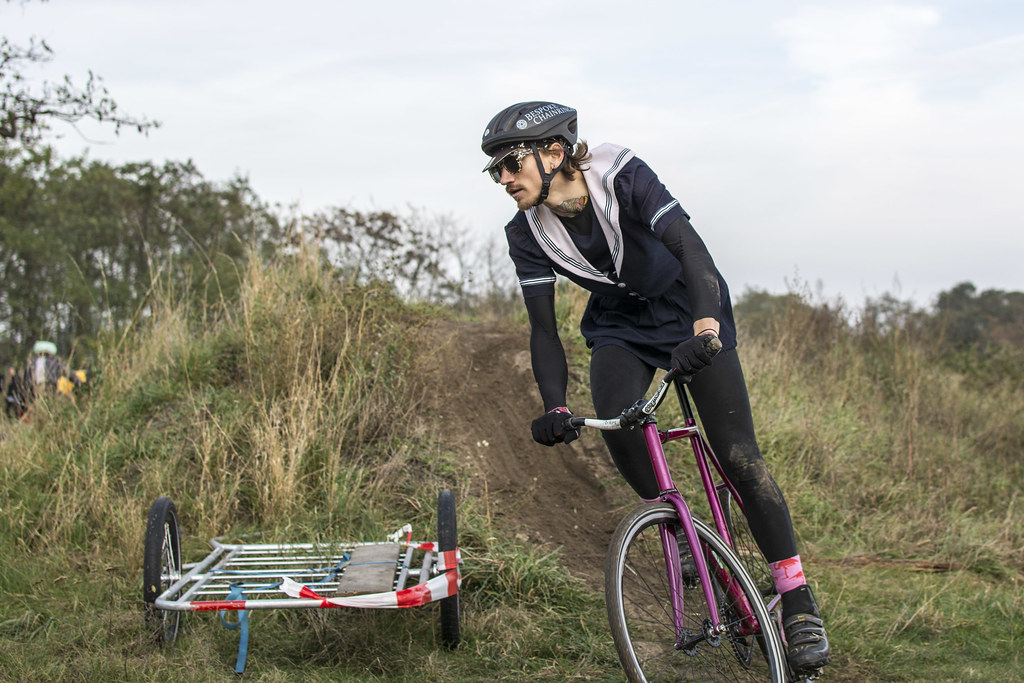 But everyone had to be extra careful with their race machines this afternoon, because two tank busters showed up and surely had not only good intentions. Luckily there was the Boxer “Henry ohne Maske” within the attendees who guarded everyone bikes from these two muggers. 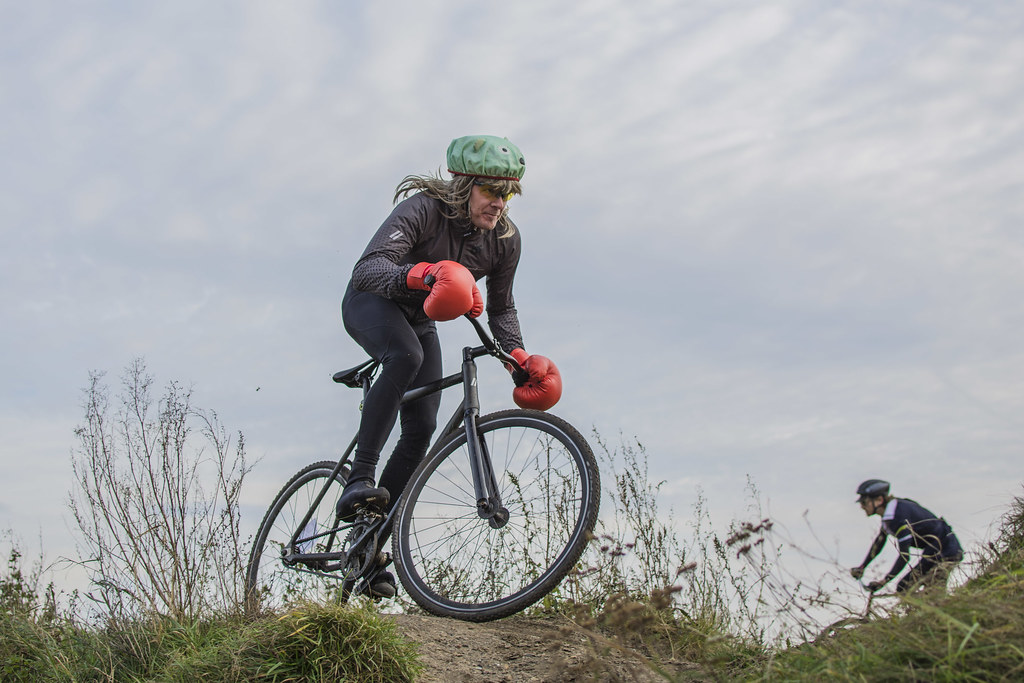 Do you know these people who always want more than what they can get? Yeah, for example the check-sign, She wanted more than a “X”, she aimed for “V”.

Since the race was held in Berlin, there is always a solid amount of Fashion people. The trends for 2019 were presented. Lets be honest, its going to be a hot summer with floral leggings, golden mini skirts and a lot of Lycra.

Even though waking up on a Saturday morning is a struggle itself for some folks, everyone made it to the track on time. Unfortunately sleepy head Rolle didn’t get out of his pajamas upfront, but made it to the pump track as an early bird.

The “Masters of Tracklocross”

The spirit was clear after the first round of the qualification heat. The boys and girls didn’t want to play in the sand. Especially Bennet (Tracklocross EV Bummsbude Reeperbahn ) and the undercover favorite Axel (FC Berghain aka Canyon cover model for the “Canyon Rad Pack”) fought for the entry of the semi finals. Rolle was in between these two, not only fighting for good positions but also with his pajama pants.

The nerdy fakenger Stefan did his homework and crossed the finish line of all heats first. But not only that, he showed off with his geeky bike skills like cycling single handed with a beer or flying over the finish line lying on his saddle. NERD!

There was a secret final race in the qualifications already when the “Master of Tracklocross” Constanze, Super Sonic and sexy Eike met at the starting line to battle the pump track. The spectators are still lacking their voices. Shouting for these three was just too intense.

During semi finals one of the krokonauts was sick of getting slowed down by her contenders. Used to traveling with the speed of light, she just went around the obstacle. But the referee was strict and she got a time penalty. In the end the krokonaut finished second right after the Unicorn, thanks to space!

Others had their issues with these wooden obstacles (hand build by Chris the Builder) as well: Rapha and Rolle had a spectacular crash into them and into each other. But no worries, the tracklocross warriors could continue. 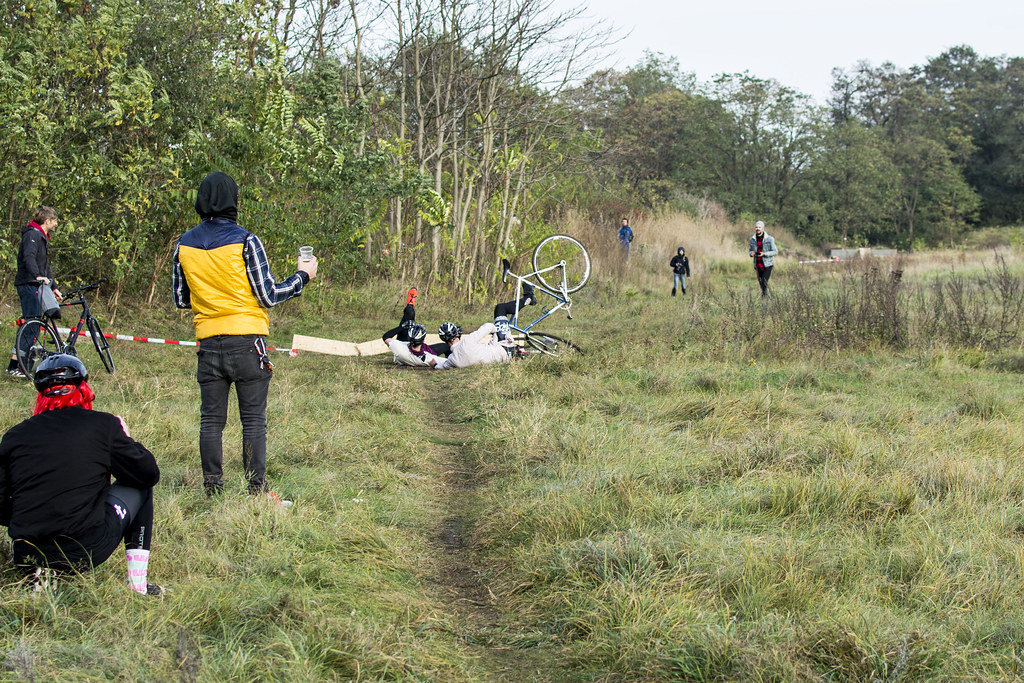 Eike was obviously a bit jet-lagged and after he caught a flat in his very first lap already, he even crashed in front of the finish line during the semi finals and missed the entry of the finals. To bad for Eike, but he convinced with sex appeal and charm as always.

The last unicorn Sami dominated all heats with her experience from previous magical battles and her super extra wide handle bars.

For those who were unlucky and missed the finals, the “Crossbüchsen race” was up to elect the “best of the rest.” Axel (FC Berghain / Canyon Dude) dominated the race after some problems in the beginning. Also Jonny was struggling to find his position, but was chasing the group in the end and could impress with his skills. He didn’t even want to stop racing on track even though it was already taken apart. A rumor from the street is that he still there, hanging around. Taking laps, trying to climb, bunny hopping.

The finals were on and it turned out to be serious business for each and everyone. So serious that Matthias choose to drop the bars! So serious that even Super Sonic crashed twice in one lap and had to change his race machine for an upgrade and chased the group. There was a lot happening behind the fakenger Stefan, but nothing can irritate a real dude from the streets. In the End Fakenger Stefan won Berlins first tracklocross race ever!

Also the women finals was packed with action. The unicorn burst through the wood obstacles in every round and made the track free the other girls. The last Unicorn could hold her position and won! 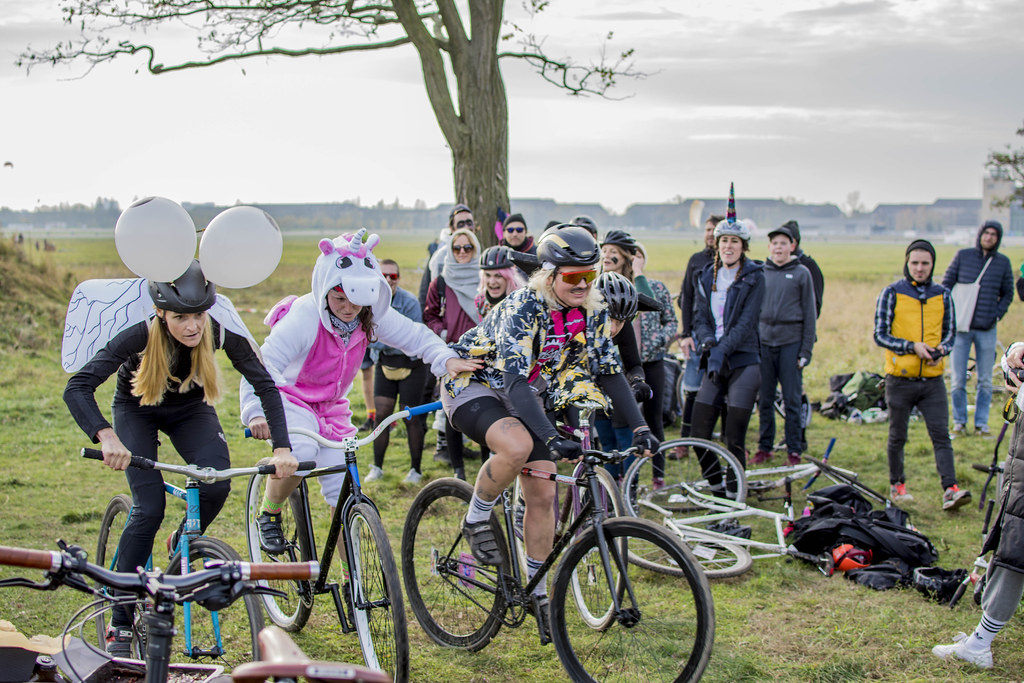 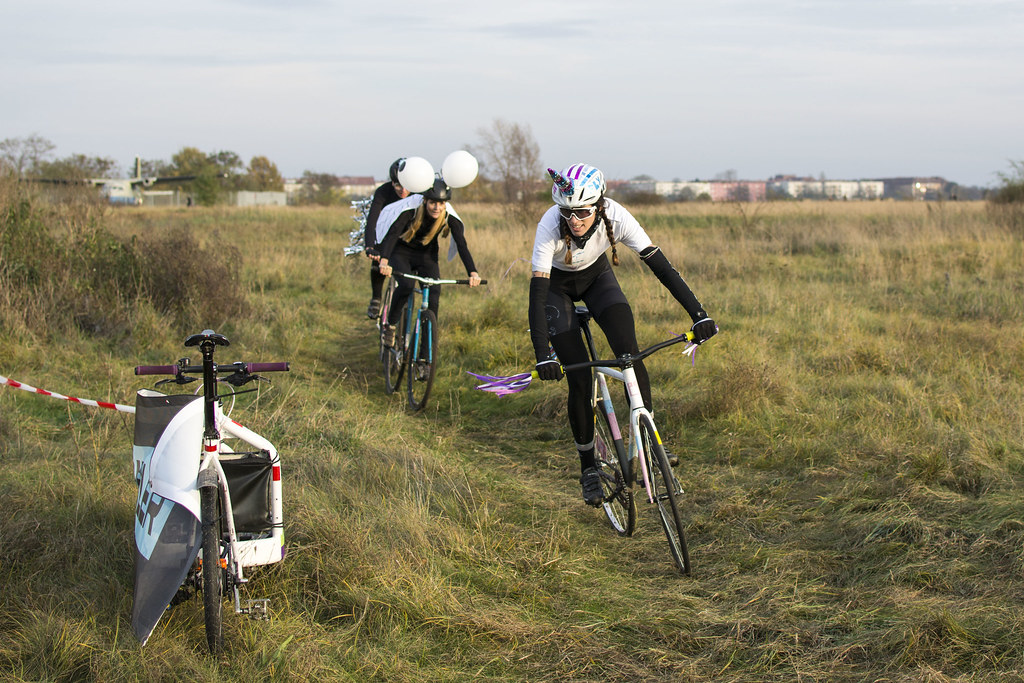 the future of tracklocross

For everyone who attended it was quite clear right after the race that this will not be their last tracklocross event! We like to thank everyone who helped to organize, prepped the course, cleaned up, cheered, raced, appeared in crazy costumes and shared the fun! Special thanks to Jule & Chris for co-organization, Bregan from our sponsor crank communication & the Fahrwerk Kurierkollektiv for their cargo bikes as well as Biehler Cycling & 8bar Bikes for prizes!

Love & Kudos for the photographers and thanks for all the great pictures: